Celestial: The Image of Gods #1

“Prepare to have your world shattered.” -Amazon Reviewer 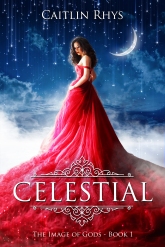 Seventeen-year-old Brynneth Carr is a mortal living in a land ruled by gods. She always wanted to meet one. Maybe shake his hand, receive his blessing.

When she finally meets Andrey, lord of wit, her patron god, and he asks her to be his lover, she can’t say no. She’s bound to obey him without question. Refusing would bring shame to her family, a curse to her name. Obeying will do the opposite. But it also means leaving her home and everything she cares about to travel with him to Revrendial, the city of the gods.

A city where mortals don’t belong and immortal celestials are more human than they should be. Where darkness lurks behind a pristine facade. Brynneth’s presence threatens to destroy that facade, and the powers that be want nothing more than to see her dead.

The one thing keeping her alive is her god’s profession of love, but she begins to suspect that isn’t as perfect as he insists. If she wants to survive for long, her only hope is to become a goddess herself and join the pantheon of power.

But will even that be enough?

For fans of Sarah J. Maas and Holly Black, Celestial is an adventure you won’t want to miss! Read now to join Brynneth in the first chapter of her epic fall from grace.

Astral: The Image of Gods #2 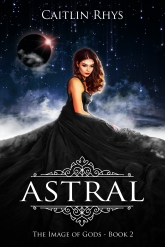 She made it out alive, but not unbroken.

Brynneth survived Revrendial, but she lost more inside its walls than she can bear to admit. Unable to go home and pursued by the Everlord’s army, she turns to the one person who can promise protection: the Neverlord. However, when she arrives at his mountain fortress, all she finds are more secrets and lies.

The boy she loves retreats inside himself as he fights a force she can’t understand.

The father she thought she knew hides a secret past she never suspected.

A masked man stalks the night, leaving death in his wake.

And the mysterious Neverlord hides in his home, seeing no one but his group of fanatical disciples.

As a siege rages outside the mountain’s walls, revolution brews within. Brynneth finds herself an unlikely playing piece in the conflict–a piece both sides are fighting to control–but she isn’t the same girl she was in Revrendial. She won’t obey without question or bow without respect. She won’t be controlled. She’ll forge her own path at any cost, even if it leads her to a darkness inside herself she never knew existed.

For fans of Sarah J. Maas and Holly Black, Astral is an adventure you won’t want to miss! Read now for Brynneth’s next step in her epic fall from grace.